“Indian food has ever been, tempting, delicious and fascinating, with external influences, great history, and a wide variety of exotic ingredients.”

Indian cuisine has always been rich and diverse. The diverse climate and weather of Indian, ranging from deep tropical to alpine, has also helped considerably broaden the set of ingredients readily available to the many schools of cookery in India. In many cases, food has become a marker of religious and social identity, with varying taboos and preferences which has also driven these groups to innovate extensively with the food sources that are deemed acceptable. One strong influence over Indian foods is the vegetarianism within sections of India’s Hindu and Jain communities. At 31%, slightly less than a third of Indians are vegetarians.

Once you study the food theory, the finding in general is that all Indian food is made up of six primary tastes or rasas – sweet (madhura), salty (lavana), sour (amala), pungent (katu), bitter (tikta) and astringent (kasya). Looking back into history we find that by 3000 BCE, turmeric, cardamom, black pepper and mustard were harvested in India. Archaeological evidence dating to 2600 BCE from Mohenjo-daro suggests the use of mortar and pestle to pound spices including mustard, fennel, cumin, and tamarind pods with which they flavoured food. Black pepper is native to the Indian subcontinent and Southeast Asia and has been known to Indian cooking since at least 2000 BCE. The three basic ingredients of the spicy stew were ginger, garlic and turmeric. Using a method called “starch grain analysis”, archaeologists at the University of Washington at Vancouver were able to identify the residue of these ancient spices in both skeletons and pottery shards from excavations in India. Examining the human teeth and the residue from the cooking pots, signs of turmeric and ginger were evident. The ancient Hindu text Mahabharata mentions rice and vegetable cooked together, and the word “pulao” or “pallao” is used to refer to the dish in ancient Sanskrit works, such as Yajnavalkya Smṛiti.

India has naturally had plenty of exposure to cuisines from all over the world, having been a part of global trade routes for thousands of years. Various cuisines have impacted Indian cuisine, from Persian and Central Asian to Arab and Mediterranean. Some of the country’s most famous meals, ranging from the substantial samosa to treats like jalebis and gulab jamuns are evidence of such influence. On the contrary various other cuisines were influenced by Indian cuisine and has adopted the taste and flavours of this cuisine. Thai cuisine was influenced by Indian cuisine as recorded by the Thai monk Buddhadasa Bhikku in his writing ‘India’s Benevolence to Thailand’. He wrote that Thai people learned how to use spices in their food in various ways from Indians. Filipino cuisine, found throughout the Philippines archipelago, has been historically influenced by the Indian cuisine. Atchara of Philippines originated from the Indian achar, which was transmitted to the Philippines via the acar of the Indonesia, Malaysia, and Brunei. Later, arrivals from Arabia, Central Asia and centuries of trade relations and cultural exchange resulted in a significant influence on each region’s cuisines, such as the adoption of the tandoor in Middle East which had originated in north-western India.

The Portuguese and British during their rule introduced cooking techniques such as baking, and foods from the New World and Europe. The new-world vegetables popular in cuisine from the Indian subcontinent include tomato, potato, sweet potatoes, peanuts, squash, and chilli.

Indian cuisine reflects an 8,000-year history of various groups and cultures interacting with the Indian subcontinent, leading to diversity of flavours and regional cuisines found in modern-day India. Later, trade with British and Portuguese influence added to the already diverse Indian cuisine. Indian migration has spread the culinary traditions of the subcontinent throughout the world. These cuisines have been adapted to local tastes, and have also affected local cuisines. Curry’s international appeal has been compared to that of pizza. Indian tandoor dishes such as chicken tikka enjoy widespread popularity.

Besides this as per Ayurveda the India’s ancient medicinal system, there are three primary categories of indian food – Satvic, Rajasic and Tamasic. Satvic foods had been rated as very good for human consumption and comprises all that’s natural and are minimally processed vegetables and pulses, it is considered to have a positive, calming and purifying effect on the body and mind. The Rajasic food is spicy, oily, salty or bitter and is said to drive ambition, competition and egotistic pursuits. The third category Tamasic food is the least considered food and is overly processed, toxic, difficult to digest and has negative effects on mental and physical well being.

The evolution of culinary taste is a constant and dynamic process with the process of exchange being alive at all times. The consistent amalgamation of different cuisines of the world into our own gives rise to the unique dishes of India.

You get a chance to discuss many more such interesting topics at the Amrapali Institute of Hotel Management, Haldwani. The Institute had carved its own niche and is a top ranked institute in Uttarakhand and Northen India. To know more visit https://www.amrapali.ac.in/faculty/hotel-management/about 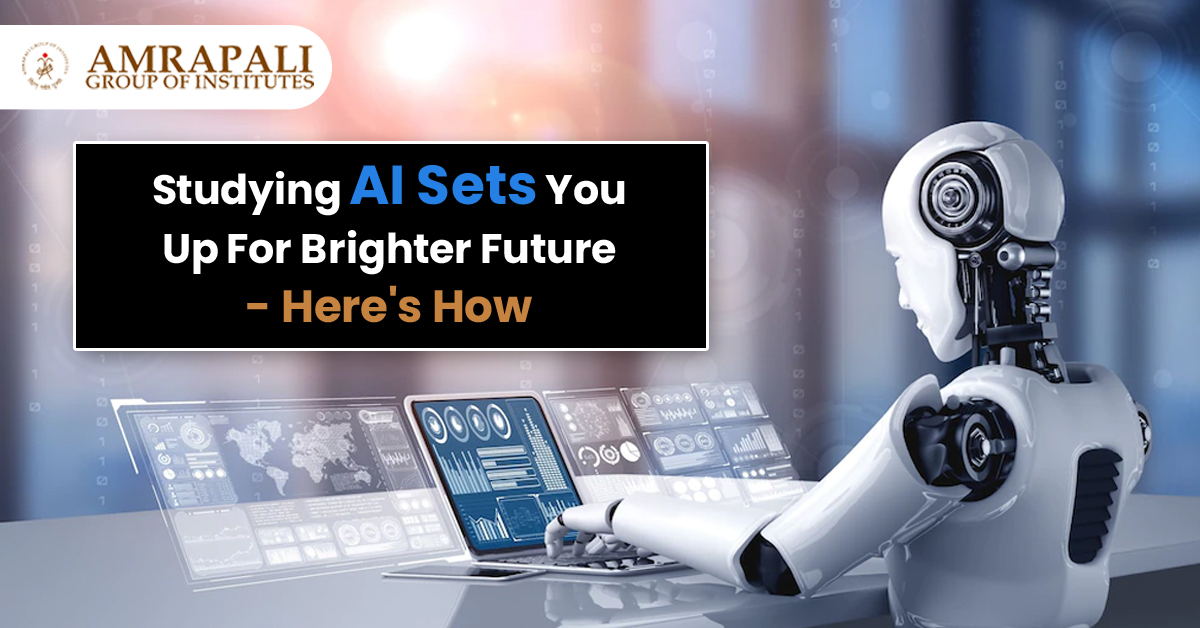 The future is quite promising for those who study artificial intelligence (AI). Here’s how pursuing a career in AI can set you up for success.

As technology advances, so does the demand for skilled professionals who can develop and manage complex AI systems. Studying AI can give you the skills and knowledge you need to build a successful career in this exciting field.

There are several reasons to study AI. For starters, it is one of the most rapidly growing fields of technology. In addition, studying AI can lead to remunerative jobs.

However, it’s not just about money. A career in AI can also be gratifying and fulfilling. As an AI professional, you’ll have the opportunity to work on cutting-edge technologies that have the potential to change the world.

If you’re interested in pursuing a career in AI, Amrapali Group of Institutes can help you get started. For this, you can get yourself enrolled in an AI certification program with us or our B. Tech. program to study artificial intelligence and machine learning. These programs can give you the skills and credentials you need to land a job in this developing field.

No matter how you choose to get started, studying AI can set you up for a bright future with numerous amplified opportunities. Pursuing a career in this exciting field can lead to lucrative jobs, rewarding work, and the opportunity to change the world.

To walk one step further in the direction of your dreams, take one of our courses offered under the Faculty of Technology and Computer Applications and reassure a radiant future for yourself.

Any experienced professional can easily say that there is good and bad to any career option for an individual. I have seen a few leaving the hospitality career in early stages of their career saying it has long schedules, low salaries and a few more statements, but on the other hand has seen many of the young graduates absorbing the pressure of the initial few months and then scaling new heights and good salaries too. Any job can provide you varied experience of bad managers, horrible co-workers, and working when you’d rather be doing something else, plus various complaints that can force you to regret. Likewise, you can have wonderful seniors as managers, a family-like work atmosphere, and customers you adore and who appreciate you.

I have seen candidates starting their first job in hospitality, as an associates with initial salaries around Rs. 14000/- to 25,000/-. They earn add on incentives as tips/gratuity and service charges which adds on to their earning, added to it, is free duty meals and accommodation in some places too. I have seen that initially they went home exhausted every day, but they sustained the early pressure and with time got skilled and were successful. They were able to prove themselves in their respective departments. They were able to give exemplary services, and guests mostly loved them. After proving that they knew the job, they got the opportunities to grow as Supervisors, Assistant manager, Manager, General Manager, all within 6-7 years of joining the industry. They were able to earn excellent salaries and bought their first brand new car, and a year later, a house and many more…. But if they work well for their development during college days, they may get selected as a Management Trainee and start the career journey as an Assistant Manager, hence they may achieve their goals faster.

So in this field if you are able to absorb the initial pressure of training and initial few months of employment you move up the ladder, your skills improve and so are the guest relation aspects. It’s a career that gives you wonderful opportunities to work in best of the hospitality chains or segments around the globe. And once you have experience, you will always be able to find a good job nearly anywhere, provided that you can demonstrate that you’re dependable, loyal, and possess the gumption to face the difficulties.

Also a candidate with a degree in this field can opt for diverse career options in future and some such options are- Government Jobs, Armed Forces, Cruise Lines, Airlines, Railway Catering, QSR’S, Multiplex, Banks, Public Relations Officers in MNC’s, Event Management, Retail Management and many more areas. The candidates once master the skills and knowledge can apply through various Governments projects and initiate to be an entrepreneur and not only earn a wonderful livelihood but can give employment to many.

To be a part of such a versatile career where getting the first job is not at all an issue and scaling new heights is possible for many, then you should have completed your 10+2 with any stream, should be hard working, eager to participate in activities, and ready to take challenges. Once you select an Institute with proven expertise in this field and is an approved institution by Government statutory bodies, then sky is the limit of your career growth. One such Institute in North India with proven 23 years of excellence is Amrapali Institute of Hotel Management, situated in foothills of beautiful lake city Nainital at Haldwani, Uttarakhand. The Institute has many accolades to its name and have a rich Alumni strength spread across the Globe working in many leading hotels of the world. The Institute ensures your success from the very first day of your enrolment in any of its programmes.

To step ahead and start your career journey with this institute and to know more click at this link https://www.amrapali.ac.in/faculty/hotel-management/why-us